It was a chilly and calm evening. After we woke our baby, we decided I would take Timothy to the ER. The short drive was filled with confusion and unknown anticipation. I was calm because I didn't know what this trip would entail. There was hardly anyone there so we saw the on-call pediatrician right away. After a routine blood test, urine collection, and x-ray, we waited and waited for a while. Timothy would fall asleep in my arms peacefully throughout our wait. I loved those hours where I HAD to hold my baby and just enjoy his serene slumber. Poor kid was only 2 months old and had multiple procedures done already. When we finally talked to the doctors again, I was informed that Timothy had pneumonia. There were some lung lesions and elevated white blood cell (WBC) count. Because of his age, we were admitted for a night to monitor his condition. It was 1 am at this time. When we were transported to the pediatric unit, the protocol is to strip the patient down to get the most accurate weight, height and other routine stats. Timothy did NOT like being awoken and naked at 2 am in the morning. They had to insert an IV for the antibiotics. I didn't understand this. Why couldn't they give him an oral one? For the first time, I saw fear on his face and heard terror in his cry. It broke my heart. I really wanted to lash out at the nursing staff for doing this when all the stats were collected while we were in the ER only a few hours earlier. But I knew they were doing this to take care of my son the best way they new how. When all was done, we were left to sleep... finally. But I didn't have the heart to put Timothy in the hospital crib. It seemed so foreign and unfamiliar. So I held him. It was suppose to be only one night.

The next morning, the attending pediatrician stopped by. She updated me on his progress and checked Timothy. Apparently, the ER doctors didn't mention the enlarged lymph nodes to her. And she was very concerned about them. Newborns should not have enlarged lymph nodes like that, she said. She wanted us to stay another night for an ultrasound of the lymph nodes. I sighed. My husband was shocked. I hadn't seen my daughter that morning and I missed her. My husband and I switched off for a few hours so I can gather some stuff. That evening, Timothy's fever spiked even though he was on antibiotics. So the doctor wanted us to spend another night to monitor him with additional antibiotics. With the ultrasound result being inconclusive, and his white blood cell count extremely elevated (antibiotics not working), coupled with his 2 large lymph nodes, the attending pediatrician consulted with the Infectious Disease (ID) doctor. He asked me a slew of questions. In conclusion, he had nothing. But he was obligated to mention that with Timothy's symptoms, it could be leukemia, though he said it was unlikely. My heart sank. Everything seemed to spin around. A few hours later, the attending pediatrician decided it would be best if we were transferred to CHOC (Children's Hospital of Orange County). That's when I started to weep. I was so strong until then. I could not control my tears.

It was the same protocol there. We arrived pretty late in the evening, but Timothy had to be stripped and they had to collect all the routine stats. A resident, several interns, a nurse and nurse assistant all came by with lots of information. As soon as the resident saw Timothy's records, he said he has been misdiagnosed. He does not have pneumonia. What?!?! was going on. And to make it even more disheartening, they couldn't properly diagnose him because he has already been on antibiotics. It would have been easier if they saw him when he had a fever. What was I to do? I felt helpless.

From that evening, Timothy was at CHOC for over a week. He had several x-rays, another ultrasound, CT scan, almost daily blood draws, and finally a biopsy. He saw several ID doctors, hematologists, pulmonologists, and finally oncologists. This was in addition to the attending doctor and his residents and interns. Nurses changed every 12 hours. Needless to say, we met a LOT of medical personnel. Even when we were discharged, the doctors did not know what was wrong with Timothy. Every doctor who came in to examine Timothy always had a surprised look. His charts betrayed his appearance. On the outside, he "looked" and still "looks" very very healthy. Above average in weight and height, he looked as if he was thriving. The doctors did not understand. So for over a week, every day, I would get an update with no new information. The only thing the biopsy revealed was that the enlarged lymph nodes had no pus and was positive for staph infection (MSSA, not MRSA). His lumps were granulomas.

4 days later Timothy was discharged, we were told he has CGD, Chronic Granulomatous Disease. It's a rare genetic primary immunodeficiency disorder. When we heard this, we were relieved, finally there was a diagnosis and it wasn't cancer. It would take months for us to really understand what this all means for our family, especially Timothy. 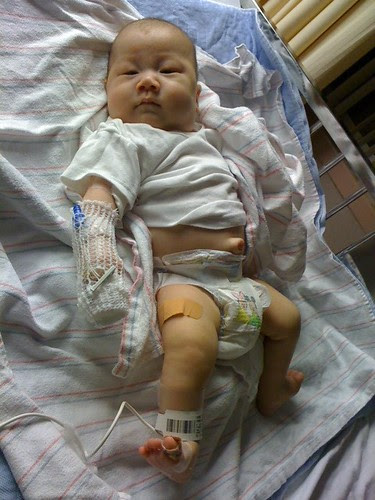 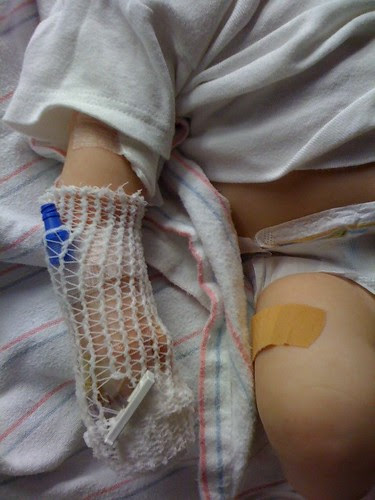 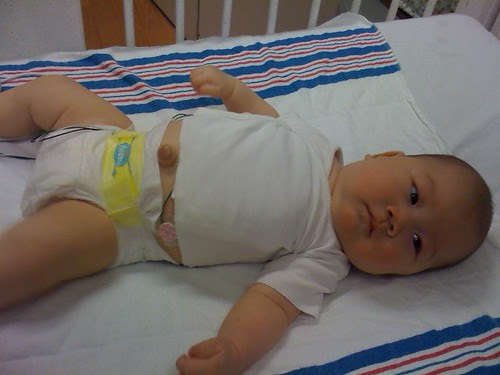 @ CHOC towards end of our stay