We are still here and chugging along in our BMT recovery journey.  It’s been nice being immersed into everyday busyness, and yet it’s been arduous and long as we “survive” each day to keep Timothy healthy.  On the brighter side, we only go to clinic once every 2 weeks :).  Though, once in a while, we go up to get additional tests done.  We have been blessed with living a “normal” life.  Chauffeuring Claire to school, running errands, cooking, cleaning and playing all within the confines of Timothy’s limitations.

Our recent challenges have started with Timothy’s new medication.  A few weeks ago, he started on the inhaler in hopes that when he is weaned off the oral steroids, his lungs will be sustained.  Well, since starting the inhaler, Timothy’s been super cranky, clingy, anxious, moody, etc…  It’s been tiring emotionally and physically.  He did get tiny bit better this week since decreasing his oral steroids.  So the past two weeks have been full of tantrums and emotional break downs.  In addition, Timothy’s been on a carb-fest.  He’s been eating rice cake soup (dduk gook) EVERY single morning and sometimes lunch and dinner too.  This week he varied it up a bit with rice/soup and noodles (soba, flour, rice…).  He seems to be losing some of his steroid fat, but has gained weight.  He does seem less hairier especially around his face.

Other than that, both Claire and Timothy have been really into coloring.

Not bad for a boy, right?  And yes, he likes to color cars, trains, AND Hello Kitty. 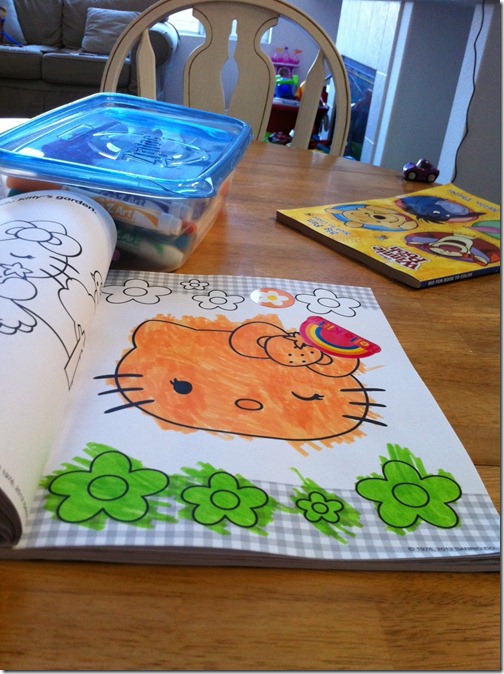 Timothy still LOVES all things car and trains.  And to ease his crankiness the past 2 weeks, we have been going to the “market” (Target) very frequently.  He would demand each morning after breakfast to go out.  When I would ask him, where?  He would want to go to the market.  Basically, he knows that he can pick out a car there.  I have been buying him a lot of toys lately… it’s become a bad habit.  But at the same time, I can’t say no to him.  I feel so bad for him.  So I let him indulge for now.  This week was a lot better.  He used to pick out the $.97 hot wheels, but he’s gotten smarter.  He wants something bigger and better.  So after letting him pick out a “nicer” toy this week, I put a limit on his purchase.  Today when we went out, I told him we are going to Target, but we aren’t going to buy any cars.  He understood, consented and obliged :).

As for Claire, she has been enjoying preschool.  She’s been singing and dancing around the house.  She began to read simple books on her own.  Hasn’t been very picky with food.  Loves riding her bike outside with Timothy.  Plays and fights really well with Timothy.  And she too has been cooped up more so than not.  With the flu season starting, I have been more cautious.  I wonder when I will stop being hypervigilant.  I hope soon.

Hope everyone is well.  Happy weekend!