THANK YOU, everyone for praying and thinking of us today.  It was so encouraging to know that we were thought of and prayed for.  And God was very merciful to Timothy and us.  I woke him up at 6:30 to feed him.  He was happy to eat as soon as I picked him up.  He ate 2 boiled eggs (no yolk), a pancake, 2 tangerines, some Korean rice cake and a cup of milk.  Yes, he eats a lot.  At around 8:30, he asked for more food.  I reminded him that he can eat after his doctor’s visit.  He was okay.  (I had repeatedly told him that he couldn’t eat anything after breakfast.)  He had a glass of juice at 10:30 and then that was it.  He did NOT ask for food all morning.  Praise God!  Even when we got to the clinic, he did not ask… a miracle.  He was a bit cranky, though… I think he was just tired by then.  He fell asleep pretty quickly after an oral sedation.  The ECHO went very smoothly.  He was sleeping so soundly, we had a hard time waking him up.  After multiple tries, he finally woke up when we said we’d give him candy :).  Timothy loves candy (skittles to be exact).  In his previous experience, he had no issues when he woke up from any sedated procedures.  But this time, it took several hours before he had full control, balance and coordination back.  He kept flopping back and forwards and side to side… he had no neck control.

We are very thankful for today.  It couldn’t have gone any smoother.  Thank you.  We have an appointment on Wednesday.  Hopefully, we will have all the results then.  And Friday is the PICC placement day.  Another NPO day :(.

Here’s a picture of Timothy after the ECHO procedure before he woke up: 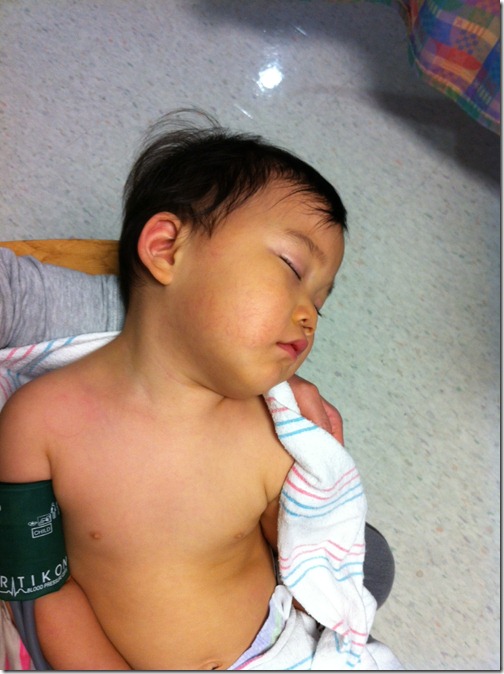