Nil per os (alternatively nihil/non/nulla per os) (NPO) is a medical instruction meaning to withhold oral food and fluids from a patient for various reasons. It is a Latin phrase which translates as "nothing through the mouth". In the United Kingdom it is translated as nil by mouth (NBM).

We were scheduled for his PICC line placement at 12:30 pm.  But the anesthesiologist gave us hope of 10 or 10:30 am.  Timothy needed to be NPO because he needed to be sedated for the procedure.  It takes about 10 to 30 minutes, but because of his age, he needed to be knocked out.  During the procedure, they insert a 27 cm catheter into his arm which directly deposit into his larger vein near his heart.  This way the antibiotics can be injected into his bloodstream.  They can also draw blood, which would save Timothy some pokes.  Of course, Timothy woke up early that morning from interruptions.  He asked for food right away.  I explained to him that we needed to remove his current IV line in order to place the PICC line and then he could eat.  That bought me some time.  After that, I started bringing out toys/surprises I had withheld for desperate times as this.  He was distracted for a while.  10 am came, then 10:30 am… no news.  We went to the playroom to play for an hour or so. 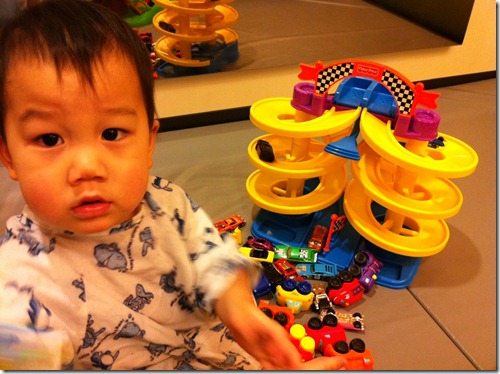 By this time, Timothy was exhausted and starving.  So we came back to our room and this was how he was… 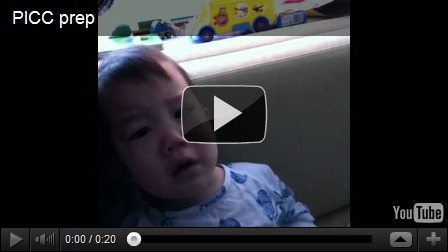 I asked the nurse around 11:30 am, if she had heard any news.  She told me that the first one took nearly 2 hours and pushed everything back and it might be delayed.  At this point, I wanted to cry.  Timothy started crying for food and I couldn’t hold myself together any longer.  I just held him and rocked him… and by God’s mercy, the nurse came in to tell me they were ready for him.  It was a little past noon.  THANK GOODNESS.  And Timothy had fallen asleep while I was holding him.

Shortly after, we were wheelchaired to radiology.  During PICC placement they take either X-ray or an ultrasound to make sure the catheter is placed in the correct place.  I signed some papers and I carried him into the OR.  Immediately, Timothy knew and had fear in his eyes.  I started swelling up with emotions too.  The nurse quickly sedated him.  It was really really fast.  As soon as they injected, Timothy knocked out snoring within 5 seconds as I was holding him.  I was asked to lay him down and to give him a kiss.  I kissed him and wiped his tear-covered faced.  I couldn’t stop the tears anymore nor look back.  I just walked out as the doctor reassured me that he was in good hands and that they would take good care of him.  For what it seemed like hours, I tried hard to not fall apart and hold myself together.  It was a tough day.

Within the hour, Timothy was in recovery and I waited for him to wake up.  And as soon as he woke up he wanted food :).  Even though I was suppose to wait an hour before feeding him, I just fed him.  He ate a large banana, pretzels, rice and soup all in one sitting.  Then about 2 hours later, ate a full, large dinner :). 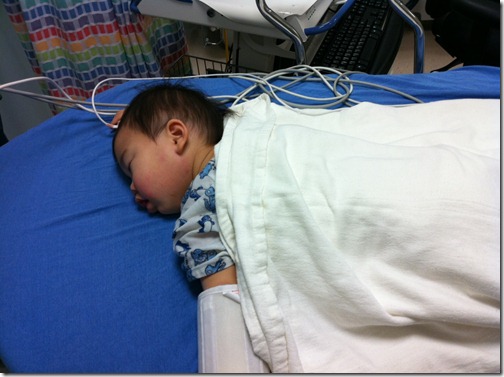