A Year Ago Today

It was a year ago today.  A year ago today, we went to the ER and Timothy was admitted.  It seems like it was a long time ago and at the same time, I can’t believe it’s only been a year.  The first 6 months of Timothy’s life seemed like forever.  Days, weeks, months would drag.  Here’s a picture of his enlarged lymph node on his right side of his neck.  This picture was taken after his hospitalizations.  He had another slightly larger one on the other side.  This symptom was what led us to the ER, plus the fever at age 2 months. 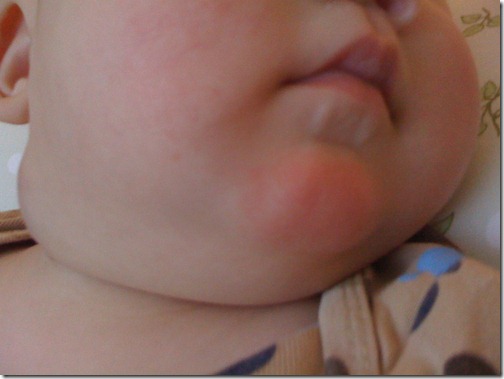 After his initial hospitalization of 10 days, Timothy was admitted to CHOC two more times within a couple of weeks for fever.  And each time we were sent to the ER, the feeling of both fear and dread was overwhelming.  The thought of spending the night at the hospital was torturous.  Because being admitted meant Timothy being poked and prodded for an IV.  By our second trip to the ER, both of his veins have collapsed on his hands and one on his feet.  They were running out of options as to where they can insert the needle.  They tried calling in the “experts”, the NICU nurses and other specialists, but it was to no avail.  Timothy has very small veins and it was hard.  And sometimes, it would clot.

What I remember from his hospitalizations, among many memories, are:

1. Incredibly nice nursing staff (well almost all of them, and we saw a LOT of them).  It was comforting to hear their kind words and their willingness to help.

2.  I don’t know if' it’s all the hospitals or not, or maybe just in CA, but they do NOT have even number diaper sizes.  Very odd.  St. Jude had Huggies and CHOC had Pampers, but both had sizes 1, 3 and 5 only.  And of course, Timothy was size 2 and would often leak.  I just ended up bringing my own.

3.  NPO.  Fasting before certain medical procedures.  This was very difficult since Timothy was only 2 months old and was still nursing pretty frequently.  NPO for him before his chest/abdominal ultrasound (4 hrs. or so) and NPO before his CT scan (a few hrs.) and NPO before his biopsy (8 hrs.).  Fortunately, all these procedures were scheduled first thing in the morning, because of Timothy’s age.  Timothy was sleeping fairly well at night (since he was awake most of the day due to many many many interruptions from nurses, doctors, etc.…)  But of course, his vitals HAD to be taken, even in the middle of the night, thus waking him up.  And he would want to nurse.  But during NPO, I couldn’t.  And I couldn’t calm or console him any other way.  So he would just cry.  That was hard and frustrating.

To fast forward the rest of the year, Timothy had some bowel inflammations.  This is somewhat common with CGD patients.  They tend to develop Crohn’s disease like symptoms.  So Timothy would have very EXPLOSIVE poops everyday everywhere.  Here’s a picture of his you know what that leaked out of his diaper and pants while he was playing in the exersaucer.  Sorry if the next two pictures are TMI. 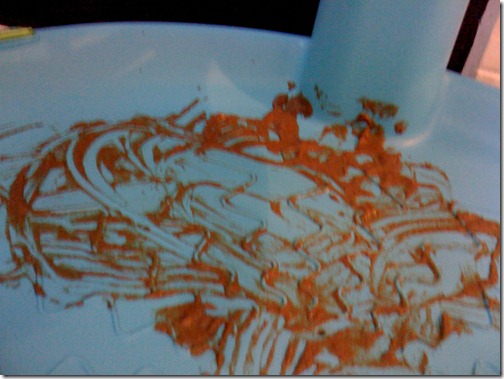 And with the bowel inflammation, he would have blood and mucous in his stool.  Again my apologies for the not so pleasant picture. 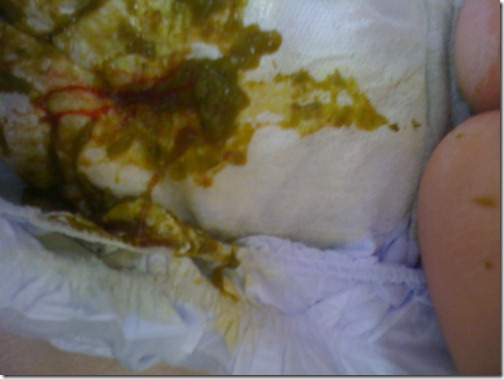 So all in all, it was quite a year.  We are so thankful that many of his earlier symptoms have subsided for now.  He is active and happy.  Here’s his sad face… so sad, but still so cute :). 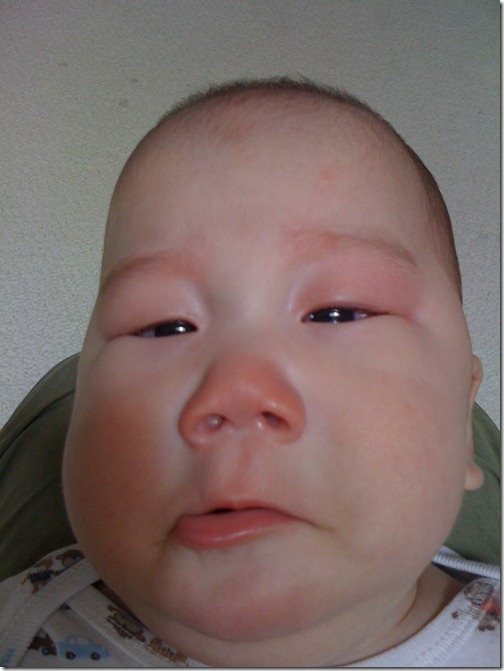